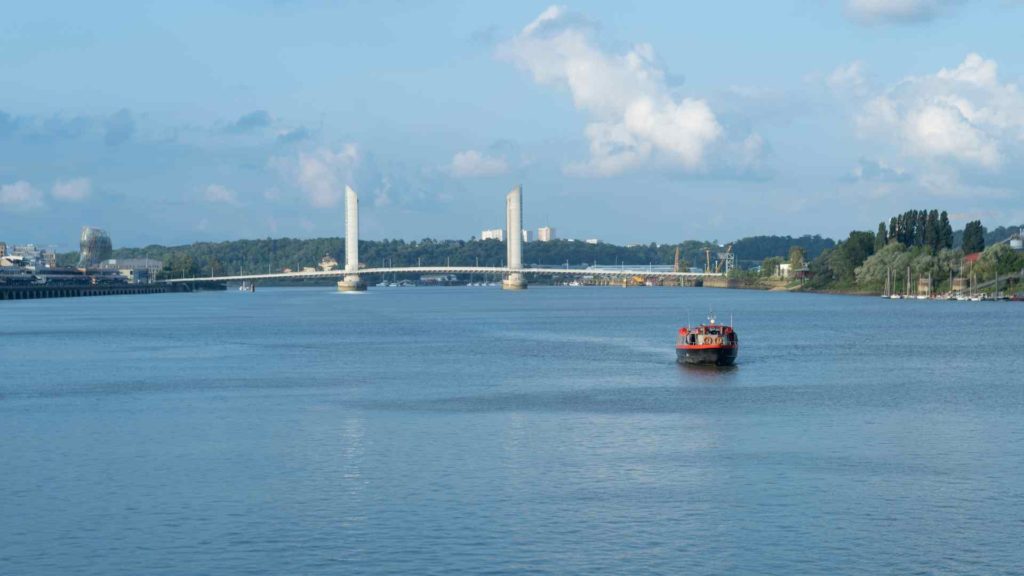 The Jacques-Chaban-Delmas bridge is one of the most modern bridges in the city. Recently built, it connects the Bacalan quay with the Brazza quay.

Bordeaux is undoubtedly a city where you can enjoy many bridges, but this one has a particular charm. It is a drawbridge construction that combines modern architecture with the tradition of the city.

The construction of the Jacques-Chaban-Delmas bridge began in 2009 and the project was completed in 2012. However, it had to wait until mid-2013 to be inaugurated.

The project was put out to tender in 2003, with five talented architects competing for accreditation. The idea was to favour slow-moving traffic, bearing in mind that it should be the same height as the Aquitaine bridge. Therefore, the lift should be completed in 12 minutes at the most.

The winner was the Lavigne-GTM studio. They opted for original footbridges for pedestrians and cyclists that were separated, as well as a great depth to the foundations. They also provided protection for the pylons and the elevation system.

The first stone was laid in December 2009, with work beginning on both banks of the Garonne. From the Bacalan district on the left side to the Bastide district on the right side.

At first, it was to be called the Bacalan-Bastide (or Baba) bridge. But, in 2012, the local government decided to change this name to Jacques Chaban-Delmas, who was mayor of Bordeaux until 1995.

The foundations of the bridge, which are to support the pylons in the area to be raised, were put in place at the bottom of the river in 2010. They are on a stone carpet that was installed beforehand. Both are made of concrete and are 44 metres long, 16 metres high and 18 metres wide.

The steel deck, for its part, is composed of two fixed sections and one movable section, and is 117 metres long.

The bridge has a total length of 575 metres. Of this, 433 metres correspond to the central structure and a further 117 metres to the lifting area, which is precisely what allows the flow of maritime traffic to be guaranteed.

The piles of the bridge are protected by concrete islands at a height of 77 metres, both at the front and at the rear. The intention is to allow for possible collisions.

The Jacques-Chaban-Delmas bridge can raise its central deck up to 77 metres high, allowing the passage of large vessels. For example, cruise ships arriving in Bordeaux and transiting along this route.

The width of the bridge, depending on the section, can vary between 32 and 45 metres. In total, there are 27 useful metres, plus 15 metres used for public transport, bicycles and pedestrians. One detail worth noting is the fact that the pavements for pedestrians and cycle paths are separated from car traffic.

It was developed for about 43,000 cars per day at most, plus a projection that it will rise about 70 times per year. This represents an immobilisation of traffic for a time of about one hour.

The lighting is one of the details worth highlighting. Although it may sound contradictory, the lights are not there to illuminate the space, but to highlight the lines of the structure.

The pylons have thousands of LED lamps that change colour depending on the tide. When the tide is high, it is an ultramarine blue; when it is low, it changes to green. They also change colour according to holidays or important dates for the city.

How to get to the Jacques-Chaban-Delmas Bridge

The bridge is in a relatively central location, between the stone bridge and the Aquitaine bridge. There are several options for getting here by public transport:

By bus, you can take any of lines 4, 7, 45 and 91.
By train, line D33 passes through this area.
The Tramway is route B which covers the route.
The stations as well as the bus stops are a three-minute walk from the bridge.

What to see near the Jacques-Chaban-Delmas?

Of course, there is plenty to see in Bordeaux. Everywhere you look you find a perfectly preserved historic building, as well as a more than charming natural environment.

Among the attractions to see near the Jacques-Chaban-Delmas bridge, there are:

La Cité du Vin: We don't need any further description for this amazing place. Just tell you that if you like wine or you are interested in knowing a bit more about its history, this is a must-see.

Musée du Vin et du Négoce: In English it would be, museum of wine and trade. And it's about the history of Bordeaux and wine being strictly linked.

Quai des Marques: The Quai des Marques is a beautiful boulevard where you can enjoy exquisite gastronomy. There are some craft shops as well as local brands.

Get to know Jacques-Chaban-Delmas through a Free Tour

Visiting Bordeaux is a must-do experience and the Jacques-Chaban-Delmas bridge should be included in your itinerary.

Here technology, aesthetics and an architectural level combine perfectly. You will enjoy this visit from start to finish, especially if you come at night, when the lights are everything.
As with any new place to see, having the benefit of a free tour can help a lot. It will allow you to learn details that only the locals know, plus they are adapted to your language.